Of Splatters, Colors and the Process of Allowing!

A blog post from 2014 from my blog Birgit’s Daily Bytes. Since it is still relevant today and documents some of my Artist Journey, I am re-posting it on this blog!

Of Splatters, Colors and the Process of Allowing!

And my inky drip/splatter obsession continues! So much fun!! It has been amazing for me to embrace all this color and lack of control. As somebody who is usually more on the muted and controlled side in her expression of creativity, these bursts of color and mess of splatters and drips are quite freeing! With the last several paintings, I’ve been really aware of what goes on for me while I paint.

It’s quite amazing what a little pattern I have got going on.

And I am usually “right” in that, however, I have found that even though it never ends up exactly like what I see in my head in terms of a picture, it DOES always seem to carry that energy and evoke the emotion I wanted to portray in the end. So, I push through.

I wonder if you can tell what that might have been in this painting? Yep, that rather large, pink splatter streak!

Yes, even in uncontrolled splatter world there’s apparently an inner critic that has “splatter standards!”

I was sure it would really not work anymore now and since I had only just put down my basic splatters, it would have been easy to just start over.

But no, these days I roll with it. I go with it, I carry on, I ignore the inner critic that keeps on telling me that I will regret not starting over, etc.

But this is how I practice courage these days – I carry on anyway!

Just like I carry on the other 5-15 times during any given painting, where I am “sure” that this is just not going to work out.

Why do I willfully go and ignore my intuition? Why do I put myself through that and isn’t this just a lot like obstinacy, rather than courage?

I do it, because I have learnt that it is not my intuition.  It’s also not obstinacy.

And that’s also the judgmental me!

Who says this painting doesn’t need a completely disproportionate pink streak going in the other direction from all the others?

So, when I push through, when I ignore “the voices,” I let go of resistance and  enter into allowing.

Allowing myself to create what it is I need to express, allowing the painting to become what it needs to be. So it can evoke/transmit what it needs to evoke, in myself and others. And that really never has anything much to do with the mind anyway and that is where the inner critics and the resistance junkies reside a lot of the time!

This being courageous and allowing thing – it’s a daily process!

Not always an easy one.  But it is becoming a gloriously freeing one!

Do I always succeed? No.

Some paintings really don’t turn out that great – in my opinion. But, I am happy to say, fewer and fewer! Maybe because there is no such thing as “making the cut”  anymore. They all are what they are! And I am so grateful for them and what each and every one has taught me and continues to teach me!

The letting go of judgments and preconceived notions – every day!

The allowing. The creating. The freer expression. The colors. The just BEing. The gratitude. 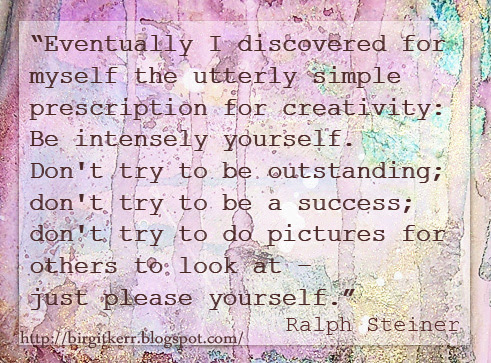 I am a mostly self-taught mixed media artist, living in Phoenix, Arizona with my husband, teenage boy/girl twins and a variety of pets.
Come along for the ride as I explore the sometimes weird, often wonderful and always brave journey of connecting to the world through art.